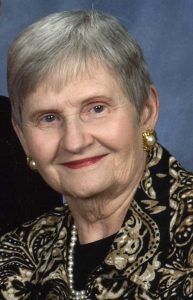 Wacille Marie Sanders, 86, of Dickinson, passed away November 6, 2019 in Texas City. She was born September 15, 1933, to Ira Marie and Elmer George Oeding in La Grange, TX.  Wacille honed her secretarial skills working for Judge Hank Schovajsa after high school.  Wacille later put those talents to work as church secretary for Memorial Lutheran Church in Texas City, where she was a dedicated member for over 60 years.  Afterwards, she worked as an executive secretary at Mainland Bank in Texas City.  In addition, Wacille was involved with other volunteer organizations in Texas City, and later in Dickinson.

Wacille was preceded in death by her parents, brothers-in-law and sisters-in-law, Clinton and Viora Wagner, George and Doris Schaefer, and Helen Mensing, and Great-grandson Oliver Hardt Ladd.

In lieu of flowers, donations may be made to Memorial Lutheran Church in Texas City or a charity of your choice.