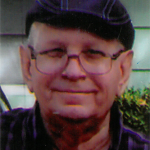 Robert Allen DeVasier,71, of Texas City passed away Wednesday, February 12, 2014 in Webster, Texas. He was born July 3, 1942 in Galveston, Texas to Allen and Jean DeVasier.
Robert worked as a meat cutter for Big Chief in Santa Fe for many years. He and his brother owned a meat market in LaMarque after he retired from Big Chief.

Robert is preceded in death by his father, his wife Jeanette DeVasier, and brother Marcus DeVasier.