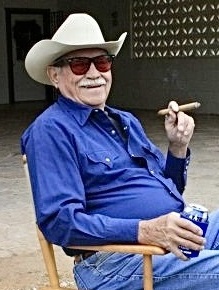 Miguel E Montalvo Sr. was born in Mercedes, Tx on Feb 4, 1929 and died peacefully on June 29, 2020 at 91 years old. He was at home surrounded by family in Pearland, Tx where he had been residing for the last 5 years with his daughter Patricia and son in law “partner” Javier Lozano.

He was one of 4 children to Aurora and Miguel Montalvo. He was a veteran of both the Marine Corps 1946-1948 and the Air Force 1949-1952 where he served during the Korean War. He was a beloved son, brother, husband, father, father in-law, grandfather, and friend.

He lived most of his life in Brownsville, Tx with the love of his life, Margarita “Maggie”. They were married 56 years before her death in 2011.  They had 3 children, Michael Jr., Patricia “Patty” and Melissa “Missy”. He lived a full and very healthy life! We always say he never took a pill until he was 85 years young!  He spent 37 years with the Missouri Pacific/Union Pacific Railroad and retired to spend more time traveling to see his kids and grandkids. He was an active outdoorsman who loved hunting, fishing and playing golf. He spent many years with the Pan American Golf Association where he developed life long friendships which he cherished. He enjoyed the golf course as recently as a few weeks ago with his grandkids and he was still giving pointers! Family was very important to him and he can finally be reunited with his wife Maggie and son Michael.

He is preceded in death by his wife Margarita; his son Mike Jr. and granddaughter Linda; parents; sisters: Minerva Rodriguez  and  Oralia Salinas.

In lieu of flowers, Mike’s request was to donate to the Brownsville Pan American Golf Association in memory of Miguel E. Montalvo for a scholarship to be set up in his name, Checks can be mailed to P.O. Box 5013, Brownsville, TX 78250