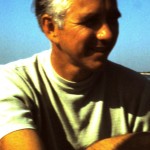 Jack passed away peacefully on March 23rd after suffering a stroke on March 12th. Born in Everett, Massachusetts, Jack moved to Houston in 1934 with his family. He attended St. Christopher’s Catholic School, St. Thomas High School and University of Houston. He worked for Sears Roebuck in college before starting a successful career with Merrill Lynch as a stock and commodities broker. Jack retired from Merrill Lynch in 1982. His passion was sailing and shrimping on Galveston Bay with family and friends. In retirement, he enjoyed spending time with family and keeping current with the financial markets.

The church is located at 3131 El Dorado Blvd., Houston, Texas 77059. A reception in the parish hall will follow the mass.
In lieu of flowers, a memorial may be sent to St. Thomas High School, 4500 Memorial Drive, Houston, Texas 77007.