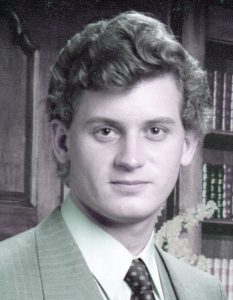 Donald Lee Cross, age 58 passed away March 13, 2019 after an extended bout with dementia. Donald was born in Galveston Texas December 8, 1960 to Jack and Greta Cross of Texas City.

Donald was preceded in death by his brother John Alan Cross, his grandparents Haden and Peggy Cross and Linson and Mirdie Hearn.

Donald struggled with medical problems since his early teens; still there were good times that allowed him to travel to different parts of the world.

Donald lived in New York and California for a number of years returning to Texas in 1992 where he has lived since then. Donald attended Texas City, High School and graduated from Rockland NY, Community College earning an associate business degree in 1984.

Donald was a talented artist; he played the piano and wrote some music.  Donald studied economics and was astute but his mental problems kept him from reaching his full potential.

He was especially fond of his young nieces and nephews and he loved his two cats, Big Boy and Momma.

The family would like to thank the staff and nurses at Ocean View and Hospice for their love and care of Donald.

In lieu of flowers donations may be made to the College of the Mainland Foundation.