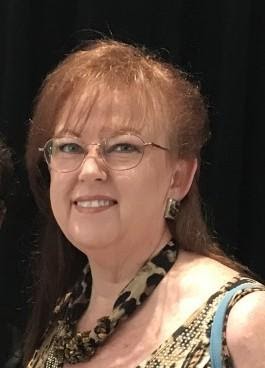 Robin Kristina Finto, 57, passed away peacefully in the early morning hours of May 07, 2021 in Webster, TX. Robin was born February 28, 1964, in Fayetteville, North Carolina to SFC William and Mary Law. Robin is survived by her husband of 29 years Carl Finto II. At the time of her passing Robin was a resident of League City, TX.

Robin graduated from Incarnate Word College in San Antonio, TX. She earned two Bachelor’s degrees: one in English and one in Psychology.

After college Robin worked in the radio industry where she was an on air personality and news director. She worked at KONO, KKYX and STAR106, all in San Antonio. Robin also worked in the durable medical equipment industry as a business manager as well as other managerial roles in the business industry.

Robin was an accomplished amateur photographer. She also had an interest in true crime stories. She was working on a crime novel at the time of her passing.  This interest led her to attend the League City Citizen’s Police Academy.  After graduation Robin volunteered with LCPD Volunteers in Policing program. She attained the level of Advanced Volunteer. She was a recipient of the League City Police Chief’s Coin of Excellence.

As a Pisces, Robin loved all things ocean and traveling. Throughout her life she went on twelve Caribbean cruises traveling to 20 different countries. Non-cruise related travel included Japan, Jamaica and Ireland. Robin was an avid animal lover and was able to make friends with most animals through the use of her long fingernails. Close friends knew her as the “crazy cat lady” for adopting rescue cats.

In addition to her husband, Robin is survived by many friends and her 2 rescue cats.  She is predeceased by her parents, a beloved Weimaraner named Smokey and a rescue cat named Furball.

A Memorial Service is scheduled for 10am Saturday, May 22nd at  Crowder Funeral Home, 1645 East Main Street, League City, Texas 77573.