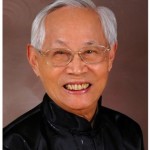 Our beloved brother Mr. Yang Yung Ban was born June 14, 1922 in AnHui Chao Xian, China. As a young man, he was studious and hard working. Due to unrest in his hometown, he left home at a young age and joined the military to serve his country. Later, he left China and moved to Taiwan with the National government in 1949. Because of his hard work and love for his country, he was promoted to Chief Inspector General in the Ministry of National Defense – Medical Affairs Bureau. As inspector, there were many monetary temptations, but he kept his own personal, moral beliefs by being honest and uncorrupted. After leaving the army, Brother Ban worked at Ta Hwa Institute of Technology as the Chief Accounting Officer. He and his beloved wife, our sister, Mrs. Wang Ying Ban, immigrated to the United States and settled in Clear Lake City after retiring. He and his wife became enthusiastically involved in the Chinese community in Houston, by teaching Chinese calligraphy and Chinese paint brush. In his retirement life, he not only enjoyed time with his children and grandchildren, he also enjoyed attending church at Clear Lake Chinese Church and the church’s Senior Fellowship. Clear Lake Chinese Church became his spiritual home. Brother Ban loved his wife and family dearly. He lived frugally so that he could provide the best for his family. Now that all his children and even grandchildren have grown up, he takes pride and joy in his four cute and lovely great grandchildren. Even though in the past few years he was sick and went in and out of the hospital multiple times, he did not bear to leave his family. No matter how hard and painful it may have been, his love, strong-will and determination to be with his family was his driving force in the last few years of his life. Brother Ban went into the peace of the bosom of our Lord in the early morning on January 28, 2014. He is now free of the bodily ailments of this world and now enjoys the eternal presence of our Father God.