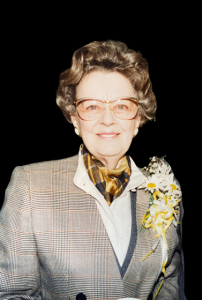 She was preceded in death by her parents, her husband Revis Carman, and her daughter Mary Kate Brooks.

“Bernadette “worked as a Registered Nurse for several decades.  She was proud to be a Red Cross nurse and of her work in hospitals in Branson, Missouri and at St. Joseph’s Hospital in Houston, Texas.  For several years after they were married, she and her husband lived in Venezuela where he worked as an engineer. Upon returning to the U.S., Revis built, and they ran, a resort on the lake in Branson, Missouri for eleven years before moving to Houston in 1972.

At the age of 63, she bought a piece of clay for $1.00 and three books on sculpting, thus beginning a new chapter in her life. Without ever taking an art lesson, she became a talented and prolific sculptor. Her clients included county buildings, churches, banks, libraries, schools, family members and friends. She truly loved sharing her work, as well as teaching her friends and grandchildren. She was a beloved Mom, Grandma and Mimi, and a dear friend to everyone she met. Her legacy of love and kindness will not be forgotten.

The family would like to extend a special thanks to the Faith Community Hospice for caring for her through the years.

For those who wish to do so, a memorial contribution can be made at https://www.RedCross.org.