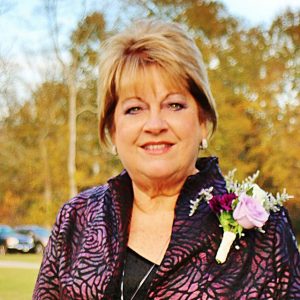 On Saturday September 28, 2019 at 11:44PM, Linda Cathcart Nickerson responded to a call from her Heavenly Father. In doing so, she ran into His arms where she received her crown of glory.

Linda was born February 23, 1952 in San Antonio, Texas to Robert and Dorothy Cathcart. Early in her childhood, the family relocated to La Marque, Texas. She graduated in 1970 from La Marque High School. Shortly after graduation, she met the love of her life, Patrick David Nickerson. They were married on May 29, 1971. During their marriage, they raised three children, Kristi Michele, Patrick Daniel and Tiffany Jill. The family found their church home at First Christian Church in La Marque, where Linda served as a pianist for many years. She always cherished the extended family she had at church. She was employed by Dow Chemical in Texas City until she retired in 2003. After retirement, she partnered with family to open a daycare facility, Building Blocks Academy. She touched many lives through the children that walked through the doors of the daycare. Once her husband retired, they built their retirement home in Flatonia, Texas. They found a new church home, Crossroads Christian Fellowship in Schulenburg, Texas. It didn’t take long for them to get involved and start impacting lives for Christ. She was involved in the community. Linda was a member of Rotary Club of Flatonia, American Legion Auxiliary, and also volunteered to Meals on Wheels. Nothing gave Linda a greater joy than having her family together. She cherished family vacations and during each trip, she would already start planning the next one. It didn’t matter what we were doing or where we were, she just wanted the family together.

Linda is preceded in death by her parents Robert and Dorothy Cathcart. Left to mourn her loss is: her husband, Patrick Nickerson, their children Kristi Parker (husband Patrick), Patrick Daniel Nickerson (Tiffany) and Tiffany Phillips (husband Kendre).  Linda’s three children gave her a new joy when she became a grandparent, known as “Mimi.” The grandkids that are suffering in Mimi’s loss are: Eryn Allen (Tristan), Allen Parker, Micah Parker, Belle Ashmore Parker,  Alexis Nickerson,  Ashley Nickerson, Allyson Nickerson, Breanne Nickerson, Hailey Phillips, Kenley Phillips, Trenton Phillips, Landon Phillips, Chelsey Coffey (Gabe), Jordan Coffey and Ciara Trahan. Mimi also had the pleasure of knowing her two great grand babies Meilani and Brynn.  Also sharing in the pain of this difficult loss are her two siblings. She has one sister Vickie Reed (Ronnie) and their son John. She has one brother Robert Cathcart (Teresa) and their three children David, Elizabeth and Nathaniel.  Linda also has numerous nieces, nephews, cousins, friends, co-workers, extended family and church families that are hurting because of the loss of her life on earth.

Funeral services will be as follows: Visitation at Smith Funeral Home in Flatonia, TX on Thursday October 3, 2019. The funeral home will receive family members from 5-6PM and all others from 6-8. There will be a second visitation at Crowder Funeral Home in La Marque on Friday October 4, 2019 from 6-8. The funeral service will be Saturday October 5, 2019 at 10:00am at Crowder Funeral Home and graveside service will follow afterwards at Galveston Memorial Cemetery with Nathan Johnson presiding.

The family would like to thank the many selfless and caring individuals for the calls, cards, visits and prayers. They would also like to thank St. David’s Hospital Austin, Texas Oncology and Austin Hospice. Most importantly, they would like to thank God for blessing their lives with such a wonderful wife, mom and Mimi. Though it is hard for us to say good bye, God, however, is saying “Well done good and faithful servant. Welcome my child.”