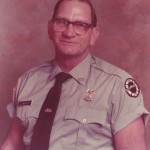 Funeral Services for Lewis Lee Willard, Jr. of Lake Jackson, Texas will be held at the James Crowder Funeral Home in La Marque, Texas at 2:00pm on Monday, June 2, 2014 with Jerry Esmond officiating. Interment will follow at Hayes-Grace Memorial Park in Hitchcock, Texas. Visitation for Mr. Willard will be held at the James Crowder Funeral Home on Sunday, June 1, 2014 from 5:00pm to 8:00 pm. Mr. Willard passed away on May 29, 2014 at his home. Lewis was born on January 1, 1932 in the rural community of Blackjack, Texas. Lewis graduated from Caldwell High School in 1951. He played football throughout high school and remained a football enthusiast for life. He and his team mates were guilty of several local pranks, Lewis not allowing the fact that his dad was the county sheriff to slow him down. Lewis moved to Galveston and married Hazel Louise Knight on August 7, 1954. Lewis first worked for the Galveston Housing Authority as a painter. He developed his work ethic and the practice of doing all jobs well here. His second job was as a government grain inspector for the Port of Galveston. His final career and most loved was 25 years as a fireman for the City of La Marque. Mr. Willard had many years as a volunteer prior to becoming a paid fireman. As a volunteer nothing would interfere with weekly drills or monthly pumper team races. The fire department was a passion that lasted past his retirement at the age of 62, still participating in state conventions for many years later. The Willards had three daughters, Cathy, Debbie, and Bonnie. They moved from La Marque to Lake Jackson in 2006. He was preceded in death by his parents; Lewis Lee Willard, Sr. and Ruby Hamby Willard Martin. Also, preceding him in death, his only sibling, sister; Opal Praesel of Rockdale, Texas. He leaves behind, wife of 59 years; Hazel Louise Knight Willard, his daughters; Cathy and husband Kenny Dyson, Debbie and husband Blake McCrumb, and Bonnie and husband Nick Cambiano. He has nine grandchildren; Jonathan McCrumb, Laura Sauceda, Trinette Dyson, Christopher McCrumb, Jeremy Cambiano, Amber Johnson, Stacy McCrumb, Rick Cambiano, and Marissa Cambiano. Mr. Willard has eleven great-grandchildren, Alyssa and Destiny, Gavin, and Brooke, Trevor, Riley, and Reagan, Tyler and Brantley, and Shane and Layne. Pallbearers will be Rudy Sauceda, Travis Dyson, Jonathan McCrumb, Christopher McCrumb, Jeremy Cambiano and Rick Cambiano. Honorary pallbearers will be, Bob Tagle, Donald Klyng, John Brasher, Bob Dolittle, Kevin Hupe, and Ron Oldman, and the La Marque Fire Department.