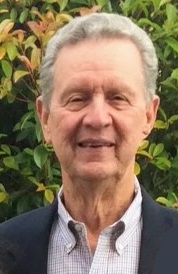 Larry Eugene Burrow, 78, a resident of Canyon Lake, TX, passed away on October 13, 2020 in Houston, TX. Larry was born on November 25, 1941 in Wichita, Kansas and grew up in Kansas until moving to Corpus Christi in 1953. He attended W.B. Ray High School where he played baseball and lettered in basketball.  After graduation, Larry attended Cisco Junior College on a basketball athletic scholarship and earned his Associates Degree. He then moved to Dallas and attended The University of North Texas to study engineering for one year before deciding that he wanted to pursue a different career. In 1962 he married Marilyn, whom he met while at Cisco, where she was also attending on a basketball scholarship.  They started a family and he began working at Republic Bank until they decided to move to Houston. There he worked at Southwestern Bank while attending night school at the University of Houston to earn his business degree.  Larry continued to work and study to advance his career and support his family. He worked for many different banks including Bank of America in Nassau Bay, TX where he was an integral part of the community and a big supporter of NASA Johnson Space Center.  Eventually, Larry’s career brought him to Canyon Lake where he was President at Sterling Bank in San Antonio. Once he retired, he continued to work as an advisory member of the Sterling Bank board of directors.

Larry loved the outdoors and enjoyed hunting, fishing, and was an avid golfer who enjoyed spending hours on the golf course with his friends.  He was an active member of Canyon Lake United Methodist Church. Larry also loved spending as much time as he could with his many grandchildren, cheering them on at their school and sporting events whenever possible.

He is preceded in death by his beloved wife of 55 years, Marilyn; parents Carl and Margaret Burrow.

The family extends their heartfelt gratitude to the ALS team at Houston Methodist Hospital. The doctors, therapists, nurses, and all other staff who work tirelessly to assist families and patients living with ALS showed kindness and compassion beyond what we could have hoped for and we are forever grateful.

There will be a visitation from 10:00am to 11:00am on Saturday, October 17, 2020 at Friendswood Methodist Church with a service to follow at 11:00am. Burial will immediately follow at Forest Park East Cemetery.

In lieu of flowers, please consider a donation to ALS Association of Texas