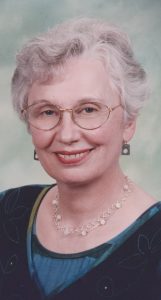 Joyce McGovern,77, passed away on Saturday, June 27, in a personal care home in Deer Park, Texas. She was born on April 22, 1943 in Wilmette, Illinois to Estelle (nee Thalmann) and George Busscher. Joyce is survived by her: loving husband, Terence; daughter, Julie (Virginia) and her husband, Jeff Isaacs; sons, Stephen (Massachusetts), and Gregory (Texas) and his wife Catherine. She is also survived by her: brother and sister-in law, Warren and Marjorie Busscher (South Carolina). Her beloved grandchildren are Henry and Marion McGovern (Texas), and Ryan and Eric Isaacs (Virginia). She also leaves behind numerous cousins in Illinois, and nephews in Virginia and South Carolina.
Miss Joyce earned a Bachelor of Fine Arts degree from Mundelein College in Chicago. It was in Chicago area that she met and married her beloved husband Terence, a transplant from New York and a student at Northwestern University. After Terence received his degree, the family moved to Charleston, West Virginia. It was here that Terence started his long career at Union Carbide. When the children were growing Joyce realized her long ideal of starting her own career as a professional music instructor, in piano. A corporate relocation in 1994 brought the family to Clear Lake Texas. Terence retired in 2001, but Miss Joyce continued her career of instilling a love of piano to young students. She taught her last lesson in 2016.
Miss Joyce belonged to several professional organizations including the piano instruction groups BAMTA, GCMA, HMTA, TMTA and MTNA. She and Terence were active church goers at St. Bernadette Catholic Church, and also supporters of cultural organizations such as MFA-Houston, HMNS, Houston Early Music and Music in Context (Rice University)
On Wednesday, July 1, 2020 a Visitation and Viewing will be held from 3:00 pm to 4:00 pm, followed by a Catholic Funeral Service at 4:00 pm at Crowder Funeral Home, Webster, TX. Interment will be held at a later date at Mt. Olivet Catholic Cemetery, Dickinson, TX.