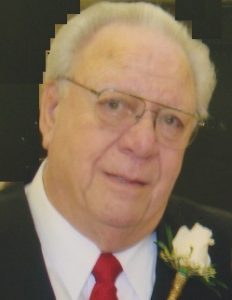 Joseph L. Loverdi Jr, 81, passed away peacefully at home on August 16, 2021 in Houston, TX.  He was born on September 16, 1939 in Houston to Joseph and Antoinette Loverdi. Joseph is survived by: his loving wife of 61 years  Esther; sons, Joe and his wife Lisa; Tony and his wife Mary Jo; daughter, Lisa  and her husband Kevin;  grandchildren, Joey , Valerie and Jacquelyn;  great grandchildren, Isabella and Madison  and numerous family members and friends.

Joseph graduated from Austin High School in 1957 in Houston TX. He began his sales career at the age of seven, selling the Houston Chronicle on Telephone Road.

As a young man, he began working at Quality Beverage Inc.  In 1975, he moved on to A.W. Chesterton Company where he spent the remainder of his career.  Throughout his career he earned numerous awards and honors.  His most outstanding achievement was being named the number one salesman in the world in 1985.  He earned a well-deserved retirement in 2005.

Joseph was an avid baseball fan. He played throughout high school and was actively recruited from a minor league team.  He loved the Houston Astros.

He had a passion for fishing, boating and volunteering. He enjoyed spending time at the Galveston Yacht Basin and taking many adventures on the water.  He spent many hours working with various charitable organizations including Sacred Heart Society of Little York, The Twenty Club, and St. Clare’s of Assisi Catholic Church where he served in various board positions.

Joseph was a devout Italian Catholic who was always proud of his heritage and his family. He was a kind and loving husband who enjoyed spending all holidays and special occasions with his family and friends. Joseph was an unforgettable man who never met a stranger.  Some of his favorite activities were participating in the St Joseph’s Altar, baking all of his favorite Italian cookies, and hosting his family and friends.