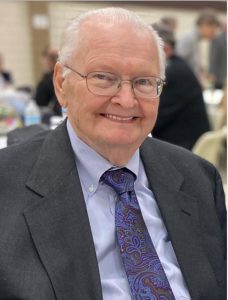 After 80 years of a beautiful life, John Victor Eriksson, went home to his Lord and Savior, Jesus, on Monday, April 27, 2020.
John was a first generation Swedish American born is Galveston, Texas, on January 6, 1940. Growing up he enjoyed riding horses at the family farm, fishing, hunting and boating. He was a very determined and accomplished person obtaining his pilots license at the age of 15, much to the chagrin of his parents. He graduated from Ball High School where he was captain of the ROTC and a decorated marksman. He attended Sam Houston State University where he was charter member of the Sigma Chi fraternity. John was an original foodie, and the food at the frat house was not up to his standards so he became the cook for the fraternity and with an entrepreneurial spirit started a catering business on campus, that was met with rave reviews and mentioned in the local paper. John graduated in 1963 with a BA and MBA in Business.
After graduating SHSU he married his high school sweetheart Mary Kay Wilson in Sacred Heart Church in Galveston. They started their life together in Killeen, Texas where they were both teachers. In 1966, They moved to Seattle, Washington where John went to work for Boeing International. John and Mary Kay started their family in Washington state where both of their daughters were born. They returned to Texas in 1972 and John went into investment banking at Gulf Coast Investment Company. He had offices all over the country and his family benefited from his travels. He brought home crates of live lobster from his office in Boston. Caviar when went to the California offices and world-famous Crawfish when working in Louisiana. He loved throwing parties and loved cooking and entertaining which is a key ingredient for bringing people together, which gave him joy.
In retirement, John opened his own mortgage company, he became a Certified Fraud Examiner and he did private investigations. At the end of his life he was the branch manager for All Reverse Mortgage Company and thoroughly enjoyed that role.
John had a servant’s heart and was actively involved in the Rodeo cookoff, Re-group BBQ team. He was President of the SHSU Alumni Association. He was an active member of Gateway church, an energetic participant in his small group and a generous contributor to the prayer group ministry.
Most of all John was a beloved husband, father, brother, grandfather, uncle and faithful friend.
John was preceded in death by his parents Gunnar Victor and Katherine Eriksson and his sister, Genevieve.
John is survived by his devoted wife of 56 years Mary Kay Eriksson, and his two daughters and their spouses Julie and Francis DeBaylo, and Katherine and Thomas Kronebusch. His seven grandchildren and their respective spouses, Alexandria, Cory, Jordan, Jeremy and his wife Paige, Dylan and his wife Amber, Kylie and Zachary.
His sister Katherine Hayes and Larry, and her family, Erik and Harriet Hayes, Emily and Daniel, and James and Stacie Hayes, Christian, Gunnar, and Noah.
His aunt, Pat Lindgren and many cousins including, Alvar Eriksson and Carla, Wayne Lindgren, Wilgert Lindren jr., LaNell Robbins, Chuck Lindgren, Jean and Cliff Barnes, and Cecelia and Jim Rappaport.
Celebration of life is Tuesday, May 5, 2020 at Gateway Church. Due to COVID constrictions it is limited attendance. Those that would like to attend remotely, there will be a livestream at
Gateway-community.org – (link to be published in FB)