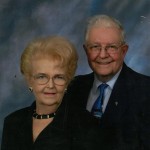 (JC) Jessie Clarence Kinzer, 91, passed away on Wednesday, May 7, 2014 at Mainland Medical Center of natural causes. He was born on June 9, 1922 in West Virginia as the seventh of eight children to the Reverend William and Mary Kinzer. He was preceded in death by his wife, Doris and granddaughter Monica. He leaves four children Patty Kay Cavazos, Billy, Jimmy and Danny, six grandchildren, seven great grandchildren and one great-great grandchild. He proudly served in the US Army in WWII as a Communications Specialist in the Philippians and New Guinea. He worked 35 years for the Union Carbide Corporation in Texas City as an Electrical Installations Inspector and Product Supply Supervisor. He was a proud charter Member of the Elks BPOE 2141 in La Marque holding many offices and responsibilities. JC, Doris and family were the developers of the Green Villa Mobile Home Park in Texas City. He was well known in the La Marque area as “JC the Bicycle Man” for bike repair and low cost rebuilt bicycles. JC and his wife Doris were lifelong supporters of the La Marque High School Football and were 50 yard line season ticket holders. Visitation will be Friday, May 9, 2014 from 4:00pm – 6:00pm at the James Crowder Funeral Home in La Marque. Funeral service will be at 1:00pm on Saturday, May 10, 2014 at the funeral home with Rev. David Smith officiating. JC will be laid to rest beside his wife of sixty three years at Grace Memorial Park in Hitchcock, Texas.