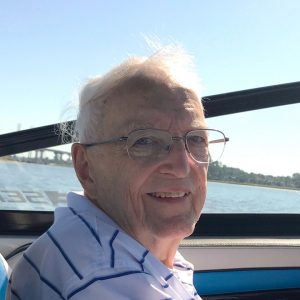 James William McBarron II earned a Bachelor of Science degree in Geology in 1960 from the University of Dayton and, in 1983, a Master of Business Administration from the University of Houston Clear Lake. From 1958 to 1961, he worked part time on a University of Dayton contract with the Wright Patterson Air Force Base Aeromedical Laboratory that provided student test subjects to determine human endurance characteristics during and after exposure to extreme environmental conditions. His work as a student assistant also involved pressure suit design testing including suit hardware evaluation for the NASA Project Mercury. His career at NASA began in 1961 as an aerospace technologist with the Crew Equipment Branch, Life Sciences Division, Space Task Group, at Langley Field, Virginia. During his time with NASA, he supported the Manned Spacecraft Center at the Johnson Space Center in Houston, Texas and worked with spacesuits for all NASA flight programs including Mercury, Gemini, Apollo, Apollo-Soyuz Test Project, Skylab, Shuttle, and the International Space Station. Throughout his career, James W. McBarron II was given several prestigious awards including being a member of the Mission Operations Team for Apollo XIII that received the Presidential Medal of Freedom, the American Astronautical Society Victor A. Prather Award for outstanding contributions in the field of Extra Vehicular Activity protection, NASA Exceptional Service Medal, NASA Distinguished Service Medal, Silver Snoopy, and others. He is the author and co-author of many spacesuit-related publications and he frequently represented NASA at national and international aerospace symposiums. When he retired in 1999, he was the Crew and Thermal Systems Division Chief. In 1999, he took a position with ILC Dover, Inc. as Spacesuit Systems Manager where he reviewed advanced spacesuit technology requirements and design concepts for future manned space flight programs. In 2002, he joined the “Gray Beards” and provided knowledge and insight learned from past programs to support development of advanced spacesuit technology and inflatable products for current and future manned-space missions including the Artemis Project.  He had a passion for teaching youth about space and science and was also an active member of the NASA Alumni League, Bay Area Community Advisory Panel, and a lifetime member of the Knights of Columbus of the 4th Degree.

James William McBarron II was a devoted Catholic and founding member of Saint Paul the Apostle Catholic Church, 18223 Point Lookout Drive, Houston, Texas 77058, where a rosary vigil and viewing will be held on Wednesday, December 2, 2020 at 10:30 a.m. Following the rosary vigil and viewing, a Mass of Christian burial will be held at 11 a.m. at Saint Paul the Apostle Catholic Church. Internment will immediately follow the Mass of Christian burial  with a short graveside service at Mount Olivet Catholic Cemetery in Dickinson, Texas.

In lieu of flowers those wishing to make a memorial donation in James William McBarron II’s memory may do so to the James W McBarron Memorial Fund supporting the St. Jude Children’s Research Hospital.