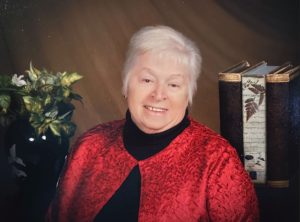 Irene Mae Langlois Scott passed away on Saturday January 14, 2023, after a short illness. She was 96 years old.

Irene was born on January 20, 1926, to Norbert and Mary Young Langlois in Racine Wisconsin.  She was employed a dance teacher, professional dancer, and an office assistant before marrying Richard W. Scott, her spouse of 62 years, on May 29, 1948.  She raised four children and actively volunteered in various capacities in her children’s schools – classroom reading aid, organizing and staffing fund raisers, and chaperoning school events.  Irene also taught Adult Basic Education so adults could earn their GEDs prior to entering the military or continuing their educational studies. She was an avid reader and a gifted seamstress and quilter.  She was a proud parent and a doting Nana to not only her grandchildren, but also friends and neighbors she “adopted” as honorary family members.  Irene was a member of the Legion Mary for St. John Catholic Church in Hapeville Georgia before moving to Houston Texas after the death of her husband. She became a member of St. Clare of Assisi Catholic Church and participated in the Just Older Youth (JOY) group.

Visitation will be on Sunday January 22, 2023, from 6 to 7pm with a Rosary at 7pm at Crowder Funeral Home in Webster Texas. A Funeral Mass will be celebrated at St. Clare of Assisi Catholic Church in Houston Texas on Monday January 23, 2023, at 10:30 am. The Rite of Committal and burial will follow later at Mt Olivet Catholic Cemetery. In lieu of flowers, donations can be made to St. Clare of Assisi Catholic Church with a notation that the donation is for the Legion of Mary.