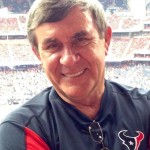 Herman “Larry” Lawrence Russell, of Friendswood, passed away on Wednesday, July 16, 2014 at the age of 66. Larry was born on February 20, 1948 in Galveston, Texas to Herman and Grace Russell. Larry served for the Galveston Police Department and received the Police Officer of the Year award in 1972 when he was only 24 years old. After retiring from GPD, he became an ASE certified mechanic and vowed never to work for anyone but himself. He owned the Gulf gas station in Galveston for many years, owned Russell’s Muffler and Brake in Bacliff for many years and provided customized service for Charter Roofing in Houston for the last 30 years. Larry loved to fish, was a certified diver and a pilot for the Texas Confederate Air Force out of Galveston. He also was an avid bird watcher and had a family of Purple Martins that adopted his backyard which led to him joining the Purple Martin Conservation Association. He was preceded in death by his wife Linda. Larry is survived by his children Ashley Claypole, Amber Roberts, Angela Ceccacci, and Lawrence Russell, brother, Robert Russell and sisters Linda Camfield and Marsha Brown, grandchildren Austin Claypole, Jeremy Roberts, Andrew Roberts, Megan Claypole, Dylan Roberts and Mason Claypole and many other loving family and friends. The family will receive friends on Sunday, July 20, 2014 from 5-7:00pm at Crowder Funeral Home, 1645 East Main Street, League City, Texas 77573. A Celebration of Life Ceremony will follow on Monday at 2 o’clock at Crowder Funeral Home in League City with interment at Forest Park East Cemetery in Webster, Texas. In lieu of flowers, you may send memorials to a charity of your choice.