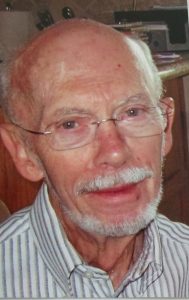 George Bassett Dotson died peacefully at home on November 30, 2019. He was born in St. Louis, Missouri to Rex and Ethel Dotson on September 15, 1942. The family later moved to Sour Lake, Kansas, near Atchison.

After graduating from high school, he worked for the Atchison-Topeka Railroad, sorting mail and tossing the mail bags on the platforms as the train slowed.

He enlisted in the Air Force Reserve and later went to work for A&E (American Electric). He traveled the eastern US installing telephone equipment for General Telephone and Electric (GTE, now Verizon). This job brought him to Dickinson, TX where he met Linda Carlisle and married her 3 months later. She preceded him in death in December of 1999, after 28 years of marriage.

He continued to work as a switching tech in the various central offices of GTE in Galveston County. Over the course of his career, he was instrumental in transforming manual switches to the automated, computerized versions in use today.

George loved fishing from his boat, especially with family, was always interested in cars and took meticulous care of them. He liked to read, collect Southwestern art and was very fond of cats. He also loved attending the Albuquerque Balloon Festival and took great pride in having completed a balloon ride.

A funeral service will be held Friday, December 6, 2019 at Moody Methodist Church, 4803 53rd street at 11 o’clock, reception immediately following. Interment will be at 2 o’clock at Forest Park Cemetery in Houston, by Crowder Funeral Home. In lieu of flowers, you may remember George by sending a contribution to the Galveston Humane Society. GalvestonHumane.org