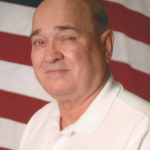 Forrest G. “Roddy” Robinson, 72 of Houston, passed away February 13, 2014 at Cypress Fairbanks Medical Center in Houston, Texas surrounded by his family.
Roddy was born October 3, 1941 in Houston, the son of Forrest Gano Robinson and Della Margaret Hood Nodden, who have preceded him in death. He was a veteran in the United States Army serving in Korea as Military Policy and most recently as a security guard.