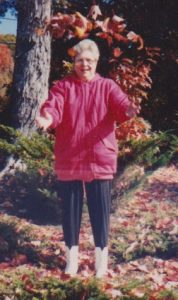 She had a passion for animals and loved to create stained glass and crochet.

A Memorial Service will be held on Saturday, March 26, 2022 at 2:00 pm at House of Prayer Lutheran Church, 14045 Space Center Blvd. Houston, Texas 77062 with a reception following. In lieu of flowers those wishing to make a memorial donation in Esther’s memory may do so to a local animal shelter. Esther and her husband, Buck, will be laid to rest together at a later date at Houston National Cemetery.