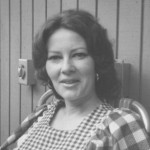 Corliss Driscoll Richardson, age 75, passed away in Galveston, TX surrounded by her family and where she lived on the seawall with her husband, James, on Monday, July 7, 2014.  Born May 25, 1939, in Houston, TX to Melbourne and Sara Driscoll, she and her brother, Arlen, were original residents of West University Place.  She recently celebrated her 41st year of marriage on May 24th to her husband James R Richardson, III.  She was a legal secretary for Texaco/Chevron for 17 years.  She was a fourth generation Texan who enjoyed traveling her beautiful state and enjoying the vistas and wildlife.  Her hobbies included gardening, reading, and crosswords.  She was a gentle, sweet, and loving wife, mother and grandmother.   She is survived by her husband, James, and her daughter and son-in-law Jennifer and Greg Aber and her grandchildren, Jacob and Sara Aber, her daughter and son-in-law Lucia and William Cropper, Jr. and her grandchildren, William “Trip” and Caitlin Cropper, and her brother, Arlen Driscoll.  A memorial service will be held on Monday, July 14, 2014 at 10:30 am at The Crowder Funeral Home, 111 East Medical Center Blvd. in Webster.  For those desiring to give a gift in her honor, her favorite charity was the American Cancer Association.