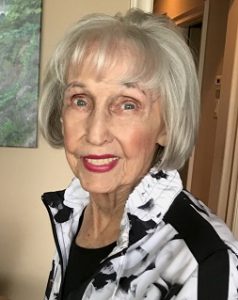 Betty Goodwin Smalling, 93, wife, mother, friend, believer, entered eternal rest, Tuesday, July 13, 2021, in Houston, Texas. She was born in El Dorado, Arkansas on February 27, 1928, to Mail B. Goodwin and Willie Haney Goodwin.
She was preceded in death by her husband of 49 years, John D. Smalling, his siblings, her brother, James Edison Goodwin (Mary), her sisters, Lillian Nell Goodwin Peppers (Ernest) and Mildred Marian Goodwin Roberds (Tommy) and their spouses. Surviving is her daughter, Barbara Sheridan Smalling Phillips and son-in-law Wiley Earl Phillips as well as nieces and nephews in Arkansas, Texas and Georgia.
Marrying her childhood sweetheart she had met on a Halloween church hayride when she was 13 and he was 15, set the course of adventure for her life taking her to Mount Pleasant Texas; Pine Bluff, AR; Sunnyvale, Concord, Sacramento and Roseville, CA and finally, Houston, Texas.
Having worked in music shops, music remained important over her lifetime and to the end of her life, she awoke each morning with a song in her heart ranging from anywhere from classic’s like Vivaldi’s “Carnival of the Animals”, to “Dancing in the Streets”, and Willie Nelson’s “Blue Eyes Crying in the Rain”. During her Pine Bluff years, she and her husband raised their only daughter, while she served as a Sunday School teacher, Room Mother, PTA President, and scout leader.
In California, for many years she delighted in chairing Safari’s for her women’s club, exploring sites all over Northern California and around Lake Tahoe.
In 2013, she came to live with her daughter and son-in-law on Clear Lake in the Houston area which she fondly referred to as the “Texas Riviera”. Her sense of humor never left her and added verve to her life and those around her.
Complimented in life as the “epitome of a lady” and after years away, as a “true Southern lady”, she was always friendly and cheerful; her effervescence raised the spirits of all who came in contact with her. She will be fondly and forever remembered and greatly missed.
Reuniting with the love-of-her-life on his birthday, the adventure continues.
An avid reader, gifts to Clear Lake City-County Freeman Branch Library, 16616 Diana Lane, Houston, TX 77062 or library of your choice would be a fitting memorial to her memory or a donation to University Baptist Church, 16106 Middlebrook, Houston, TX 77059 or church of your choice. A Celebration of Life will be held at a later date.
Crowder Funeral Home
111 E. Medcial Center Blvd
Webster, TX 77598
281-280-9000