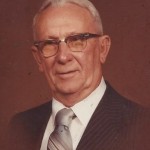 Ben Lee Bozeman, age 94, passed away June 22, 2014, at his residence. He was born April 17, 1920 to Walter Elbridge and Sarah Emma Williford Bozeman in Kountz, Texas. He graduated high school in Latexo, Texas and served in the US Navy in WWII. In 1957, he and his wife Velma Pauline (Clines) Bozeman and two daughters moved from Lufkin, Texas to Texas City. They were co¬-owners with his brother Fred and Zeta Bozeman of Bozeman Appliance Store which he operated with his nephew Walter Bozeman until retiring in 1986. Ben & his family were charter members of St. John’s United Methodist Church. He was a member of the Noon Optimist Club of Texas City where he served two terms as president. He loved to hunt and fish and was an avid gardener. He created beautiful stained glass which he shared with friends and loved ones. Ben was a special friend to all who knew him.