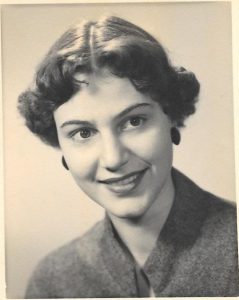 Antoinette Jean Fossati, 80, passed away peacefully in her home on Saturday, September 23, 2017. She was born March 13, 1937 and grew up on a farm in Victoria, Texas. Antoinette was extremely dedicated and devoted to her Catholic faith and to her family. She lived her life helping others. Antoinette is survived by her children, Paul Fossati (Rona), Mary Compton, Kay Shore (Mike), and Jason Fossati (Courtney); grandchildren, Gina Fossati, Christopher Compton, Ben Compton, Amanda Compton, Abbey Fossati, Madeline Fossati, Nicholas Fossati, and Nathan Fossati; beloved life-long friend since 2nd grade and sister-in-law, Gloria Borreca; many nieces and nephews; and her favorite caregiver, Nina Lugo. Antoinette was preceded in death by her parents, Anthony Lawrence Pozzi and Anne Matilda Depine; brother, Anthony Pozzi; husband, Gerard Fossati; and son-in-law, Mike Compton.

Antoinette graduated high school from Nazareth Academy as valedictorian. She attended Victoria College and then earned a bachelor’s degree in education from the University of Texas and a master’s degree in reading from the University of Houston Clear Lake. After 20 years of teaching, she switched careers and worked as a lab technician at DuPont until retirement. Antoinette was involved in many volunteer activities including Habitat for Humanity, visiting nursing homes, and various church ministries. She and her late husband Gerard also hosted a monthly family breakfast that has remained a cherished tradition. Gardening, pottery, crocheting, quilting, sewing, reading, and attending plays were some of her favorite hobbies. She also loved spending time with her family and was a wonderful grandmother.

Services, including a Rosary and Mass followed by lunch, will be held Friday, September 29th at 10:00 A.M. at St. Paul the Apostle Catholic Church, 18223 Point Lookout Dr. Nassau Bay, TX. A private burial will be held after the reception.

In lieu of flowers, those wishing to make a memorial donation in Antoinette’s memory may do so to Casa Juan Diego, P.O.Box 70113 Houston, TX 77270