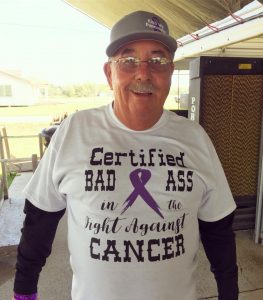 James Edward Lowe, 61, a resident of Santa Fe, TX since 1989, succumbed to cancer at the comfort of his own home surrounded by his family on Tuesday April 7th, 2020. James was a proud BOI born December 3, 1958 at St. Mary’s Hospital to Robert and Alma Lowe.

James was an avid sports fan and loved the outdoors. He coached many years of softball, football, and baseball. As his children grew older, he then became a spectator in the stands and number one fan of his favorite players. In his free time between work and sports, James enjoyed hunting, fishing, and spending time with his family and friends with a beer in his hand.

James is preceded in the death by his father, Robert Edward Lowe.

We would like to give a special thank you to the people at Texas Oncology; especially Dr. Meer, Jennifer and Holly for their loving care and support during his battle with cancer. Also, the family would like to extend their sincerest gratitude towards Crowder Funeral Home for being very accommodating and understanding during this difficult time.