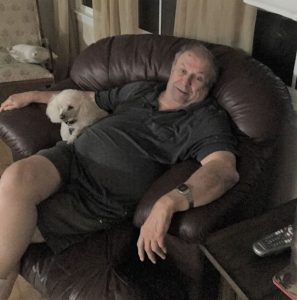 William John Moore, resident of Hitchcock, Texas passed from this life, September 12, 2019. He was born October 12, 1942 in Galveston, Texas to B.J. and Margie Moore.
He was a Master Chief in the U.S. Navy and served 28 years. Bill was a son, husband, father, grandfather, and brother. He was a quiet man with a big heart and a smile for everyone, who will be missed by all who loved & knew him.
Bill was preceded in death by his wife, Janice Pipes Moore of 54 years.
Bill is survived by his sons, Mike Moore and wife Chris, David Moore and wife, Lindsay; daughter Jackie Anderson and husband Jon; grandchildren, Mallory and (Lisa), Samantha, Rachael, Corey and ( Addie); sisters, Yvonne and (Johnny), Frank, Mary Ann and (Lou), Beverly & (John); as well as his nieces & nephews, who thought the world of him. Last but not least his dog P.J. and grand- pups, Shelby and Iggy.
In his honor, a visitation will be held Monday, September 16, 2019 from 5:00 – 7:00 pm at Crowder Funeral Home Chapel, Dickinson, Texas with a graveside service , Tuesday, September 17, 2019, at 10:00 am in Hayes Grace Memorial Park, Hitchcock, Texas under the direction of Crowder Funeral Home, Dickinson, Texas.