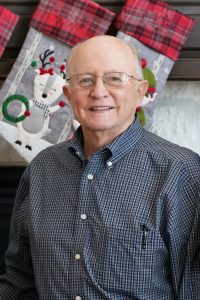 Tom was born August 24, 1943 in Sterling, Kansas to Dale and Julia Fankhauser. He worked on the farm and at his father’s Ford dealership until finishing high school. He joined the US Navy during the Vietnam War and served honorably from 1966-1969, spending a year stationed in Vietnam. After his naval service, he returned home and attended Wichita State University. While in Wichita he met his future wife, Carol Reed, and the two married in 1971. He and Carol moved to Kansas City so Tom could attend dental school at the University of Missouri Kansas City.

After graduating Dental School, Tom started a dental practice in Wellington, Kansas. Soon thereafter, the two moved to Wichita where Tom purchased a dental practice and served his patients for the remainder of his career. He became a fellow in the Academy of General Dentistry.

The couple’s only child, Grant, was born in 1979. The Fankhausers acquired horses when their son was in grade school. Tom began riding regularly and soon joined a polo club in Andover. Tom and Grant played polo together for many years.

Tom enjoyed spending time with his family, traveling, golfing, and classic cars. He was a proud Shriner and a long-time member of Eastminster Presbyterian Church.

As the years went on, Tom found a renewed love of golf. After Tom and Carol retired, they moved to Friendswood, Texas, to be near Grant, his wife Megan, and their daughter, Holland. Tom golfed regularly in his retirement, joining a men’s league, and golfing with Grant and Megan on the weekends.  His passion for classic cars continued as well. He tinkered with his 1927 Ford Model T for many years, and then turned his attention to a classic Mercedes convertible that he would joyfully drive around town.

Tom will be dearly missed by his friends and family. He is survived by his wife, Carol, son Grant (Megan), granddaughter Holland, brother Jim (Mary) Fankhauser, sister Dana (Larry) Cooper, good friend Bud Sankey, and his beloved dog and companion, Mort. He was preceded in death by his parents Dale Fankhauser and Julia Wollschlager.

Family will begin to receive guests at 1:00 p.m. Friday, July 23, 2021, with a service at 2:00 p.m. at Crowder Funeral Home in Pearland, Texas. In lieu of flowers, the family suggests a donation to the Wounded Warrior Project.