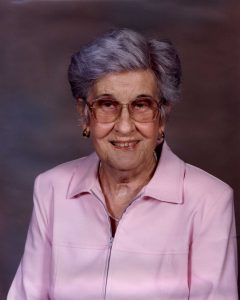 Ruth (“Bobbie”) Annette Connorty Gehret, 97, a beloved wife, mother, grandmother, great-grandmother and longtime resident of LaMarque, passed away on Sunday, November 10, 2019, at Regent Care Center of League City. Ruth was born on December 11, 1921 in Galveston and moved to LaMarque in 1952. She retired from Mainland Bank in Texas City in 1984. Ruth faithfully attended Peace Lutheran Church in Texas City since moving to LaMarque in 1952.

Visitation will be held at Crowder Funeral Home in Dickinson on Wednesday, November 13, 2019 from 1:00-3:00 with the funeral service to follow beginning at 3:00 with Pastor Matthew Brackman officiating. Graveside services will follow at Hayes Grace Memorial Park in the Mausoleum in Hitchcock.

The family would like to sincerely thank the staff at Regent Care Center of League City for the love and care they provided to Ruth throughout her stay.