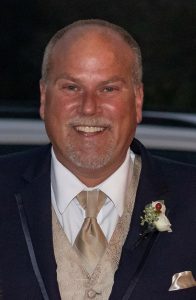 Russell served in the Army Reserves and attended McNeese University before starting his 30+ year career at Ineos Chocolate Bayou (Amoco/BP) as the Lab Manager.  I’ve had the pleasure of hearing the most wonderful stories from his co-workers of the love they have for him.  They say his shoes can never be completely filled.

You could either find him in the garage woodworking, on the water, or on the golf course whooping Raymond and Jaydee’s butt!! Thanks to Mike’s lessons.

It was such a great joy seeing the love between a son and his mother. He was the light in her beautiful eyes and the protector to his sister.

We were blessed to take many vacations and travel to many states with our daughters. So many wonderful memories and stories we have. Amber eating butter thinking it was cheesecake or Sarah having to be carried back up the Grand Canyon because her little legs were so tired. The most memorable is our first family road trip to WV, with four loud girls, crammed in the backseat playing the alphabet game. His memories will live on as our girls tell his stories and especially his walking through the forest jokes.

As in life, he is also helping those in his passing, through organ donations.

Russell is being cremated, and his celebration of life will be held on his birthday 2.6.2022. Details to follow.