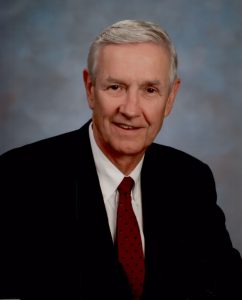 Robert J. Naughton, age 82, passed away peacefully on February 7, 2021, in Houston, Texas, after a courageous battle with pulmonary fibrosis. Bob was born on April 26, 1938 in Parnell, Iowa, to Laurine and Roland Naughton and is survived by his loving wife of 59 years, Margaret (Peggy) McCarty Naughton, their three sons Kevin (Cynthia), Timothy (Camille), Michael (Lori) and their daughter-in-law Marla Smith (Mark); ten grandchildren, Tim (Anna) Naughton, Alicia Naughton (Camp Fuller), Courtney Naughton, Kevin Naughton, Robert Naughton, Kimberly Smith, Clare Naughton, Brendan Naughton, Connor Naughton, Collin Naughton; two great-grandchildren, Joshua Naughton and Alexia Naughton, sisters-in-law Kay Naughton and Jackie Naughton and numerous nieces and nephews. After graduating from Immaculate Conception High School in Cedar Rapids, IA, Bob attended Loras College in Dubuque, IA, where he was a standout in the classroom and on the basketball court, taking his team to the NCAA Small College Division Tournament in 1959. Bob’s years of Catholic education formed the compass that set the direction for his life. After graduating from Loras in 1960, he married his college sweetheart, Peggy and together they embarked on a 26-year adventure in the United States Navy while Bob served as a Naval Aviator with distinction. Bob’s early Navy career took his young, growing family from Pensacola, Florida, to Corpus Christi, Texas, to Barbers Point, Hawaii and to Lemoore, California. While on deployment in Southeast Asia with VA-113 aboard the USS Kitty Hawk, Bob was shot down over North Vietnam and was taken Prisoner of War on May 18, 1967. After spending 2,118 days in captivity, now LCDR Naughton was released during Operation Homecoming on March 4, 1973. Bob continued his Naval career first at the Naval War College at Newport, Rhode Island, and then as Executive Officer of VA-83 at NAS Cecil Field before assuming Commanding Officer duties of VA-83 in 1977. His next command was also at NAS Cecil field, where he assumed command of VA-174 in 1979. After being promoted to the rank of Captain, Bob returned to the senior officer course at the Naval War College, and from there accepted his final assignment as Commanding Officer of NAS Dallas, Texas. Bob retired from the Navy in 1987, having received military decorations including the Silver Star, the Legion of Merit, the Distinguished Flying Cross, the Bronze Star, two Purple Hearts and eighteen Air Medals. In 1989, Bob became NASA’s Chief of Aircraft Operations Division at Johnson Space Center in Houston, Texas. He held that position until 2004, and while at NASA, was awarded the Outstanding Leadership Medal and Distinguished Service Medal and was recognized in 1995 by President Bill Clinton with a Meritorious Senior Executive Award. In retirement, Bob and Peggy were active volunteers at their parish and in prison ministry at the Harris County Jail and at Isaiah House, an organization that helps formerly incarcerated men assimilate back into society. In their free time, they traveled, enjoyed fine wine and exceptional cuisine, visiting family, and in the later years, accumulating points as Bridge partners, where he achieved Bronze Life Master status. Bob was happiest when sitting at the head of the dining room table, surrounded by family, and engaged in spirited conservation about a myriad of topics.