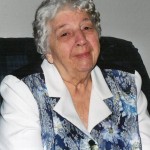 During World War II, she was a true “Rosie the Riveter” in Lakehurst, NJ. Upon joining the Women’s Army Corps (WACS) in 1943, she served in Greenville, South Carolina in the hospital, motor pool and subsequently in administration as an office clerk. She volunteered for the Pacific theater and was assigned to the Far East Air Service Command as a clerk in the Rear Echelon and saw duty in New Guinea and the Philippines.

A celebration of Pearl’s life will be held on Saturday, February 1, 2014 at 2:00 pm at Crowder Funeral Home with Rev. John Montgomery and Rev. Robby K. Magee officiating. Burial will follow at Forest Park East in Webster, Texas.
Pallbearers will be her grandsons.