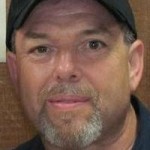 Nathan James Eymard, 54, resident of Conroe, Texas, passed away April 26, 2014 in Webster, Texas. He was born in Metairie, Louisiana to parents Floyd and Judith Eymard. Nathan was a Tug Boat Captain who loved spending time with his family and cooking for others. He also enjoyed fishing and hunting.

Nathan was a generous, sweet kind loving man who will be missed by many. He will be in our hearts forever.