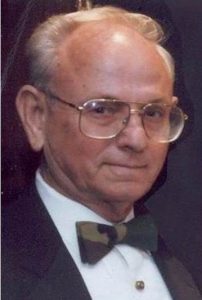 Ten years after beating lung cancer Ed succumbed to idiopathic pulmonary fibrosis (IPF) on September 30, 2019. He was preceded in death by his parents Merle D. & Merle T. Briggs. He was born in Fort Worth on June 1, 1939. He is survived by his cherished wife Elizabeth and treasured family; son Randall Jay (Mireyda), grandsons Kyle Edward & Max Antonio; son Kenneth Lee & partner Brant; adoptive son Dwight Wright (Laura), granddaughter Holly Wright; brother Ralph “Butch“, sister Sharon Ann Hart, brother Michael; a plethora of nieces and nephews; and friends and colleagues around the globe. Ed joined the navy at young age and spent the next four years either in training or onboard a destroyer. After the navy he returned to Fort Worth and went to work for General Dynamics on the B58 bomber program. It was here that his sister introduced him to his life mate Elizabeth Hallmark and that started their long journey together.
They moved to Abilene where he helped integrate General Dynamics F-series Atlas Missile complexes. Ed then became a migratory missile worker on the Minuteman, Saturn and Atlas update program. When NASA opened the new Manned Spaceflight Center Ed joined Philco as a Tech Rep and they moved to Houston. He was there for the installation of the ground systems and support of the Gemini program. In 1965 the Bendix Field Engineering Corp. (BFEC) came to Houston recruiting for NASA’s ground tracking network. After a brief interview the Briggs’ were on their way to Guaymas, Mexico and they never looked back.
Additional assignments were at Corpus Christi, Texas; Guam; Rosman, North Carolina; Madrid, Spain; Kauai, Hawaii; Columbia, Maryland; Dakar, Senegal; and Back to Columbia where he was the Associate Program Manager for Goddard’s Ground Tracking & Data Network. In 1984 BFEC joined a team to compete for the Johnson Space Center’s Shuttle contract. In 1986 they relocated back to Houston after the successful award of the contract for the M&O and Hardware Engineering of the ground systems. Additional contracts for the space station, the DSC and the White Sands Test Facility were added to the company’s business model. Ed learned from his mentors and took pride in developing the staff and arranged progressive training to enhance their future. He tried to be available with a helping hand. Ed retired as the Director of Houston Operations and devoted his time to travel and hunting. Ed and Elizabeth made frequent world-wide trips and cruises. He purchased a small 275 acre ranch for “Wild Life Management” and built an off-grid cabin complete with wind and solar power. He made improvements to enhance the deer, turkey and aoudad population yet failed to eradicate wild hogs. The ranch became too much for him to run and the 420 mile one way trip didn’t help. Ed harvested his last deer, an aging 8 point buck with a shattered tine early on opening day in 2016. He had sold the ranch and relinquished ownership that new year’s eve. In the early days of the space program with the final “Loss Of Signal” as the spacecraft went over the horizon you terminated the computer’s process with a simple command.
LOS,T^
A Memorial Service will be held on Saturday, October 12, 2019 at 11:00 am at Seabrook United Methodist Church, 3300 Lakeside Drive, Seabrook, TX 77586