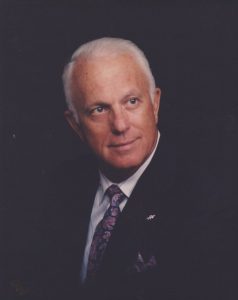 Lt. Col., David Hugh Owen, Jr. was born in Meridian, Miss. on September 29, 1930. He passed away on Monday, June 10, 2019 at Memorial Hermann Hospital of MODS (Multiple Organ Dysfunction Syndrome). He was preceded in death by his father, mother, sister and two children: Antoinette “Toni” Owen, and David Henkel Owen. He is survived by his loving and devoted wife of 37 years, Martha; daughter Angela Elizabeth; and grandchildren Jennifer Michelle and David Douglas; step children John Willbanks, Shelly Sutterfield, Stacy Horachek and her husband, Peter; his sister-in-law, Carolyn Dixon (of whom he was very fond); as well as four step-grandchildren and numerous nieces and nephews, and many, many friends.
He received a BSME degree from Mississippi State University and an MSAE in Aeronautical Engineering from the Air Force Institute of Technology.
During his Air Force career, he directed the development of the first air-to-air guided missile launch and flight computer simulation. Following his Air Force career as a command fighter pilot, he joined NASA and was promoted to deputy division chief of the Space Environment Test Division. During this period, he kept up his flying proficiency by service with the TANG (Texas Air National Guard). He later went into another successful career in commercial real estate development.
In retirement, he enjoyed reading, crossword puzzles, bridge, travel and dinners with friends.
David was a Paul Harris Fellow with the Rotary Club of Space Center and past president of the Rotary Club of Seabrook. He was an endowed member of Clear Lake Lodge #1417, AF&AM, past president of the NASA Area Shrine Club and a Past Patron of Seabrook Chapter, #1096, O.E.S.
On Monday June 17th, Visitation is at 2:00 p.m. Service at 3:00 p.m. at Crowder Funeral Home, 111 E. Medical Center Blvd., Webster, TX. Interment to follow at Forest Park East. In lieu of flowers, please remember the Shriners Hospitals for Children.