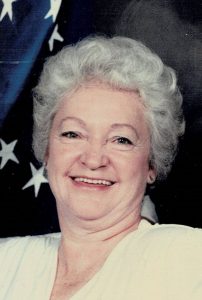 Lorena Elliston Coble, of Dickinson, Texas resident since 1964, passed away March 27, 2020 in League City, Texas. She was born Alice Lorena McCreary on May 30, 1932 in Lott, Texas to parents James McCreary and Gladys Opal Davis McCreary. She married Billie Gene Elliston on July 4, 1949. After Bill’s death in 1977 she married Brodie Coble in 1980. Together she and Brodie spent many years traveling across the country in their motorhome, and they both enjoyed bowling and square-dancing.

Visitation will be held Saturday, June 27, 2020 at 1:00 p.m. followed by a Memorial Service at 2:00 at Crowder Funeral Home in Dickinson, Texas with Pastor John Elliott of Gulf Coast Four Square Church officiating.