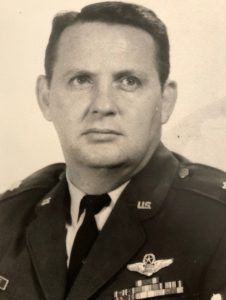 Lieutenant Colonel Kevin Countie, USAF Retired, 88, passed away peacefully on June 29, 2020. He was a deeply loving husband, father, grandfather and great grandfather, committed to his faith, family and country. He was born in Boston, Massachusetts on June 28, 1932 to John Thomas Countie and Mary Frances McCarthy of Revere, Massachusetts. He graduated from Immaculate Conception High School in Revere, Massachusetts and the University of Nebraska at Omaha. He enlisted in the U.S. Air Force and was selected for Aviation Cadets in 1951. He was commissioned as a Second Lieutenant following his graduation from navigator training in 1952. He was very proud of his twenty plus year career as a navigator/observer having served on B-66, C-123, O-2, OV-10 and C-141 aircraft before retiring as a Command Navigator in 1972.
He served at many duty stations during his career but was most proud of his assignments with operational squadrons. He was stationed at RAF Sculthorpe and was assigned to a B-66 bomber squadron with a tactical nuclear mission. He then transferred to Pope AFB where he transitioned to the C-123 aircraft. He and members of his squadron developed low level mountainous terrain navigation techniques, which became applicable to flying in Southeast Asia. He deployed to Vietnam as an advisor and trained South Vietnamese air crew members and supported U.S. Special Operations forces missions during his tour. Following his deployment to Vietnam, he was assigned to the 1st Commando Wing at Hurlburt Field, Florida. Among the many missions his squadron flew, he conducted operational testing and dropped the first “Daisy Cutter” bomb at the Eglin AFB test range. He also supported combat operations during the Dominican Republic uprising. Shortly thereafter, he transitioned to the O-2 and OV-10 aircraft and was deployed to Thailand and flew as a forward air controller directing combat airstrikes in Southeast Asia. His last duty station was Dover AFB where he flew the C-141 aircraft. Among their worldwide missions, his squadron regularly flew as part of the presidential detail transporting secret service and other support personnel when the President traveled.
After retiring, he became a very successful sales representative, selling compressed air packages and blowers to the petrochemical, oil & gas and manufacturing industries along the gulf coast. However, of all his accomplishments, what made him most proud were his grandchildren and great grandchildren. He simply cherished them.
He is preceded in death by his parents and his wife, Pauline Oates Countie of Livingston, Texas, whom he adored. He is survived by his loving son COL (RET) Kevin T. Countie, USA and wife, Dr. Deborah Countie along with their children, Claire Bryant, Anna and Alan Kwok; his daughter Karen Barnes and husband, John along with their children, Julia, Brian and Amy Barnes; his daughter Eileen Johnston and husband, Pete along with their children, Hilary and Max Roeder, Abby and John Rutherford, Jr. and Will Johnston; his son MCPO (RET) Gregory Countie, USN and wife, Carol along with their children, James and ENS Bradley Countie, USN; his son Stephen Countie and wife, Cindy along with their children, SCPO Don Swope, USN and wife Holly, ND2 Kevin E. Countie, USN, Aubrey and Daniel Ringer; his daughter Catherine Devall along with her children, John Devall IV, Allison and Nick Townsend; his daughter Constance Countie; and great grandchildren Margaret Rutherford, Aurora Townsend, Merrick Swope, Remi Swope and Paisley Ringer.
A memorial service will be held at Crowder Funeral Home on East Medical Center Drive in Webster, Texas at 10 AM on Friday, July 10, 2020, for immediate family members and their children. The service will be broadcast on-line via livestream for friends and other family members. A graveside service with military honors will be conducted at Houston National Cemetery on Veterans Memorial Drive, Houston, TX at 1PM on Friday, July 10, 2020.