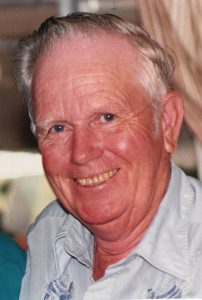 He was a machinist, woodworker, and an inventor, having created a lap desk for his child’s schoolwork.  Jerry also made the city’s paper for his engineered wagon wheels that turned with lights at the end of the driveway at Christmastime.  He was an avid camper who enjoyed boating, barbequing, watching football and baseball.  Talented in construction, Jerry built multiple structures, including his home, and designed a specialized trailer to hold the family’s motorbikes.  He loved tinkering with things and exploring outside.  He had a grand time dancing, especially the jitter-bug, and spending time with friends and family.  His skill set was endless and not to mention, those gleaming, beautiful blue eyes that captured the hearts of many.  Let’s not forget his infamous word, “outfit” —and that chicken-shit grin!

Jerry traveled across the world working on packing machines for Mira-Pak, Inc., Keebler, and Frito-Lay for several decades.  He retired from ISP Technologies Inc., formerly known as GAF Corp, after 17½ years of employment and was a member of the International Association of Machinists and Aerospace Workers.

Please join us to celebrate his legacy.  Visitation with family is Friday, June 14, 2019 from 6:00-8:00 PM at the Crowder Funeral Home in La Marque, Texas.  Services will be held on Saturday, June 15 at 1:00 PM with Pastor Mark Robinson officiating, followed by burial at Forest Park East Cemetery in Webster, Texas.

Special thanks to Traditions Hospice of South Houston.