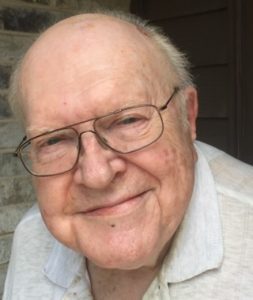 Howard Hall was born on January 14, 1934 in Mt. Clemens, Michigan to Howard and Grace Hall. He was an “only child” who’s life was changed drastically when his father died at an early age. His devoted mother raised him with the help of family to become an intelligent young man with a strong work ethic and a devotion to family. Persevering through financial hardship, he graduated with a B.S. in Aeronautical Engineering from Indiana Institute of Technology. Upon graduation, he joined the Army and became an instructor in the aeronautical field.

Howard met the love of his life when stationed in Texas in his first position after leaving the military. A ravine-haired beauty named Ruth would become his wife and keep the Michigan boy in Texas. His career was a successful one working for multiple contractors in the Space Program and he has resided in Clear Lake City for over 50 years. He became father to a son and a daughter. Howard Hall was preceded in death by his beloved Ruth. He is survived by his: children, Rebecca(husband David) and Howard(wife Dorothy); as well as two grand-children, Ashley (husband Jeff) and Sera; Two great-grandchildren, Harper and Taylor, also brought a sparkle to Howard’s eyes in later years. The greatest joy in this modest man’s life was his family. He was also blessed to be surrounded by devoted neighbors who became dear friends.

An informal “Celebration of Life” will be held at the family residence on October 17 (Saturday) from 2 – 4 pm. The family would like to celebrate this wonderful man and also recognize him as a 3-time cancer survivor by inviting those that knew him to make a donation to the  American Cancer Society in his honor.