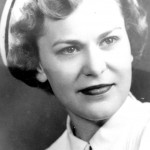 Helen J. Coffey, 81, died Sunday, July 6, 2014. She was born to the late John and Jennie Slomba, September 23, 1932, in Lawrence, Massachusetts. She graduated from St. John’s School of Nursing. She married Dr. Richard J. Coffey of Townsend, Massachusetts in 1955. She taught at St. Catherine Laboure School of Nursing, and later became Director of Nursing at the Greenery Rehabilitation and Skilled Nursing Center in Hyannis. Helen was an active member and Eucharistic minister at Our Lady of the Cape Catholic Church in Brewster. A life-long resident of East Dennis, Massachusetts, after her retirement Helen moved to Houston, Texas, the home of her two youngest daughters. The joy of her life was cooking and spending time with family, especially her many grandchildren. She is survived by her four daughters, two sons, and twenty grandchildren. A memorial service is being held in Houston. In lieu of flowers, the family is requesting that donations be sent to the American Diabetic Association.