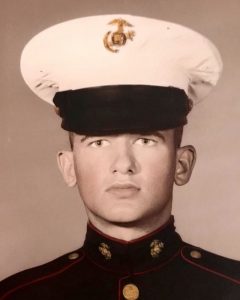 Gerald Wayne Paschetag, age 74, of Danbury, Texas passed peacefully from this life Saturday January 2, 2021 in Galveston, Texas with his family by his side.

He was born December 5, 1946 in LaMarque, to parents John and Byrda Elaine Paschetag. Gerry graduated from LaMarque High school in 1965 then pursued a career as a Lineman.

He was a proud member of the Marine Corps Reserves, also a member of the Fraternal Order of De Molay International.  Gerry gave 30 years of service to Texas New Mexico Power Company, but his greatest accomplishment was being a father and grandfather. He could work cattle from hand, foot, horse, and truck. He loved the Houston Livestock Show and Rodeo Bar-B-Que Cook off, he even placed one year. He loved participating in the Hay Hauling Contest with the Galveston Fair and rodeo. Hunting was a highlight each year especially for his kids. He loved “taking his Mamma fishing”, playing 42 with the family, and watching football while enjoying Mamma’s homemade Seafood Gumbo, garlic bread and cinnamon rolls. If you knew a Paschetag you were always welcome. Gerry always had a big loving heart.

Lauri and Stephen would like to thank their immediate and extended family and friends who prayed and cared for him during his illness, Texas New Mexico Power Family, UTMB family, and the Crowder family.

In his honor a visitation will be held Thursday, January 7, 2021 at 1:00pm with a funeral service to follow at 2:00pm at the Crowder Funeral Home Chapel in Dickinson, Texas.

In lieu of flowers, donations may be made to the American Cancer Society.