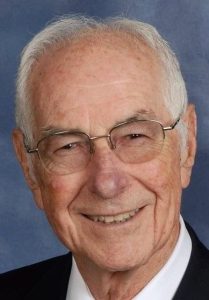 Fred Louis Menotti, 96, died peacefully on June 28, 2022.  He was a loving husband, father, grandfather, and friend to many.  His strong faith in God impacted many lives as it was reflected in his kind and generous nature.  He was an encourager that brought out the best in everyone he met.  His motto in life was, “the Good Lord will take care of us.”

Fred was born in Dickinson, TX on October 13, 1925, to Fred Menotti and Assunta (Susie) Albonetti, both of whom had immigrated to America from Italy in the early 1900’s.  After graduation from Dickinson High School, class of 1942, he briefly worked with his father in the family café business, Fred’s Place, until he enlisted in the Army Air Corps in 1943.  Fred was a World War II veteran and served as a tail gunner on the B-17 Flying Fortress, with the 381st Bomb Group – 8th Air Force, where he earned numerous medals and citations.   He was also an active member of the Veterans of Foreign Wars and former Post Commander.

Upon his honorable discharge in 1945 and return home, he met and married the love of his life, Madelyn Trippodo on November 24, 1946, in Dickinson, TX where they lived their entire 65 years of marriage.  He returned to work with his father in the café until they sold it in 1952 at which time he went to work for Monsanto. He worked his way up to Supervisor and retired in 1982 after 30 years.

Fred’s passion was his family and his faith.  He and Madelyn raised three children, Carolyn, Robert and Janet.  As a life-long member of Shrine of the True Cross Catholic Church, he served in numerous ways including Lector, Extra Ordinary Minister, and the Sponsor Couple program. He served on the Parish Council, Finance Committee and trained the Altar Servers, was property manager of the church and school property, and a proud Knight of Columbus for over 64 years.  Fred was a member of the Knights of Columbus Father Roach Council 3217 and a Fourth Degree Sir Knight with the Matthew H. Wilson Assembly 1988.  Beyond his church involvement, he was active in the Dickinson Volunteer Fire Department in the 1950’s and early ‘60’s, and was an avid gardener.  With his early retirement, he and Madelyn delighted in planning and taking many family trips for over 20 years, which have contributed to a lifetime of wonderful memories.

In lieu of flowers, please send donations to Shrine of the True Cross Church or School or charity of your choice.