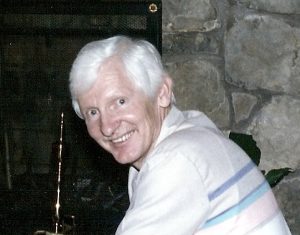 Dr. Harvey Neufeldt passed away early Tuesday morning, December 28, 2021, at the age of 85. Loving and devoted husband to Anne Wiens Neufeldt for 63 years, Harvey and Anne redefined the term soulmates. Harvey was an inspirational father for his three daughters, Beverly (Rick) Wagner, Sharon (Steve) Carter, and Ellen Neufeldt. His four grandchildren – Rich, Kelly, Ryan (Laura) and Leslie – brought him tremendous joy and pride, along with his recently welcomed great grandchildren, Hobie and Beckett.

A scholar and educator, Harvey was a lifelong student and critical thinker with a sharp and focused mind. He was a man of tremendous faith, integrity, kindness, friendship, and principle; but above all else he was a man of his family. The lessons, encouragement, inspiration, and love he provided his daughters are gifts which continue to be present in their personal and professional lives every day. Harvey was his daughters’ hero in the model of his patient and caring character and for all the ways he encouraged them to pursue their educational and personal dreams.

Harvey was born on August 27, 1936, in Yarrow, British Columbia, Canada. He attended Mennonite Brethren Bible College in Winnipeg, Manitoba, where he received a bachelor’s degree in theology and, most importantly, met the love of his life, Anne. Married in 1958, Harvey and Anne always treated their relationship as a true partnership for the good of their family. Their love and devotion to each other was the steady foundation upon which their family was built and nurtured.

After receiving his Ph.D. in history from Michigan State University, Harvey and his family moved to Cookeville, Tennessee, where he was a professor in the College of Education at Tennessee Tech University (TTU) for almost 40 years. During this time, Anne worked as an administrative assistant in the College of Engineering. Passionate about the transformative power of education, Harvey and Anne mentored and supported countless undergraduate and graduate students. Harvey took tremendous pride in seeing students thrive in their chosen studies and careers. He was not only highly regarded by his peers but also sought after by students.

Anne and Harvey called Cookeville, Tennessee, their home from 1970 to 2015 and were active members of First United Methodist Church in Cookeville. Dedicated and devoted to his faith, Harvey became a lay minister for two small Methodist churches in White County, Tennessee, for a decade. In 2015, Harvey and Anne moved to League City, Texas, to be close to their daughter, Sharon.

Harvey was always an avid researcher and co-authored many books which not only delved into subjects that helped shape his life but also those that were deeply important to him such educational equity, his Mennonite heritage, and Tennessee Tech University’s institutional history. In honor of TTU’s 75th anniversary in 1991, Harvey co-authored The Search for Identity: A History of Tennessee Technological University, 1915-1985 (Neufeldt & Dickinson, 1991).

Raised in the Mennonite Brethren Church, one his greatest passions after retirement was working with his cousins to chronicle the immigration and settlement of his Mennonite community, Yarrow, British Columbia. Under Harvey’s extraordinary supervision, the Yarrow Research Committee, a group of ten Mennonite scholars, produced five volumes.

Beloved by countless friends, colleagues and family members who miss him dearly, Harvey is also survived by his brother, Jerry Neufeldt, sister, Elfrieda Konrad (Abe), and a large extended family of cousins. He is preceded in death by his parents, Peter and Helen Neufeldt, and his older sister Irma Neufeldt Epp and sister-in-law Edith Neufeldt.

Together, we remember and celebrate his life as a tremendous man with a spirit that brought joy and love to so many. His legacy will live within us.

A celebration of Harvey’s life will be tentatively scheduled for spring 2022. In lieu of flowers, the family invites you to make a contribution in his memory to the Neufeldt Electrical Engineering Scholarship or the Phi Delta Kappa (PDK) Neufeldt Scholarship Endowment in the College of Education at TTU. Both of these funds reflect Harvey and Anne’s love of the TTU community and its educational mission to support lifelong student success. Checks may be made payable to the TTU Foundation and mailed to Tennessee Tech University, PO Box 1915, Cookeville, TN 38505, or online at www.tntech.edu/univadv/giving/online-giving.php. Or you may call 931-372-3055 or email jwsmith@tntech.edu.

To view a photo montage, please click the link below: