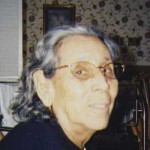 Dominga Hernandez, 88, resident of Dickinson, Texas, passed away January 17, 2014. She was born August 4, 1925 in Mexico to parents, Fortunato and Petra Ramos.

She was a longtime member of Shrine of the True Cross Catholic Church in Dickinson, and St. Mary of the Miraculous Medal Catholic Church in Texas City. Dominga loved to play bingo and watching her television show Pop. She enjoyed spending time with her daughters and family.