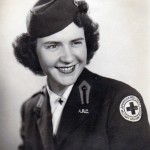 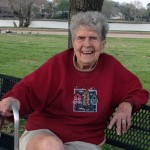 Barbara “Bobbie” Duffy Colovin, 95, of Nassau Bay, passed away on Saturday, July 12, 2014.  Bobbie served in the Red Cross during WWII and as a volunteer and staff member for disaster relief nationally for over 65 years. A 48-year member of the community, Bobbie moved to Nassau Bay with her husband Jim during the early days of the Space Program.  She loved Nassau Bay and its activities with friends and neighbors.  She was a long-time member and past president of the Nassau Bay Garden Club.  She also volunteered for electoral polling and voter registration.  A member of the Webster Presbyterian Church, she served as a deacon and Stephens Minister.  Bobbie influenced many young people, especially her children and grandchildren, through leadership and participation in Boy/Girl Scouts and swimming and water safety instruction.  Barbara Colovin had a great love for family and friends and touched many lives through her service to others.  Bobbie is survived by her children – James “Chip” Colovin of Nassau Bay, TX; Sue Staples and husband Don of Livingston, TX; Dale Colovin of Greenville, SC;  John “Jack” Colovin and wife Marie of Fountain Hills, AZ; Kevin Colovin of Nassau Bay, TX; Daughter-in-law Judy Colovin of Greenville, SC.  Grandchildren – Kimberly Staples of Arlington, TX; Scott Colovin of Greenville, SC; Heather Staples Bowman and husband Eric of Irving, TX.  Great grandchildren – Dawson and Aubree Chritian and Jaxon Bowman.  And a host of nieces, nephews and dear friends.  Bobbie is preceded in death by her husband, James “Jim” Colovin; her parents John and Claire Duffy; her brother, John Duffy; and grandson Jeff Colovin.   Visitation will be Wed. evening from 5 to 7 pm at Crowder Funeral Home in Webster.  She will be laid to rest at 10 am Thurs. at the Houston National Cemetery and a Memorial Service will be held at 2 pm Thurs., July 17, 2014 at the Webster Presbyterian Church.  Memorials may be made to The American Red Cross or the Webster Presbyterian Church.