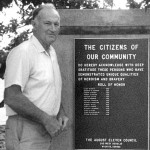 ARNOLD (RAY) MERRITT was born and raised in Anniston, Alabama, where he played high school football and enjoyed hiking and camping in the hills near his home. After Pearl Harbor, Ray volunteered for the Marines, and while serving in San Diego met and married Katie who was also a Marine, and to whom he remained married for 65 years, Moving to Wichita, Kansas after the war, Ray became a master craftsman with glass and metal and a lifelong member of the Brotherhood of Painters and Allied trades Local 558. On August 11, 1976 while working in on a plate glass installation job in downtown Wichita, Ray came under fire from a sniper shooting from the top floor of the Holiday Inn. He ran to the assistance of a fatally injured co-worker and was himself gravely wounded. A plaque in downtime Wichita near the sight of the shooting commemorates his actions and those of other local heroes. Ray and Katie later moved in Niceville, Florida where they had a glass business before settling in Houston where he worked in his daughter-in-laws medical office in Texas City for more than 10 years. He died in Webster, Texas on May 1, 2014 of natural causes. Ray was a loving husband, father, father-in-law, grandfather and great-grandfather. He loved the outdoors, particular fishing and horse shoes, and was an avid fan of the Alabama Crimson Tide football team. He is survived by his sons and daughter-in-laws, Greg & Jody Merritt and Rob & Dorothy Merritt, his grandchildren, Stacie, Jaymes, Steven, Jennifer, and Katie and her great-grandchildren Samantha, Katlyn, Tyler, Riley, Megan, Ethan, Jaeda and James. A memorial service will be held at the Friendswood United Methodist Church, Friendswood, Texas at 10 AM on Saturday, MAY 10TH, 2014.