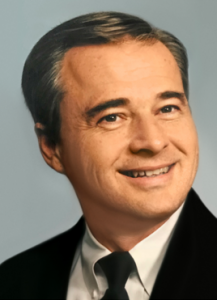 Richard Hermling fought a valiant five year battle against dementia and is now at peace. Richard was born February 2, 1943 in Highland Park, MI and passed away March 20, 2020 in Friendswood, TX.  Richard is survived by his loving wife of fifty-six years, Linda Wegner Hermling, and his son Todd Richard Hermling & his wife Mary Beth and his daughter Dawn Hermling Sims & her husband Rodney Sims.  He also leaves behind his two sisters, Karen Hermling Thomas & her husband John Thomas and Vicki Hermling Leazier and her husband Page Leazier.  He is also survived by seven grandchildren whom he adored Noemi, Shantel, Jackie, Elena, Christina, Hunter, and Joey and two cherished great-grandchildren Bella and Beau. He is also survived by his sisters-in-law Diane Christensen and her husband Neil Christensen and Jan Wegner.  He also leaves behind his beloved nieces, nephews, cousins, and an array of good friends, neighbors, golf buddies, and former NASA co-workers.  Richard was preceded in death by his loving parents, Alroy C. Hermling and Evelyn Sayen Hermling, his infant sister Joan, his nephew Terry Thomas, his cousin, Linda Hudak, his brother-in-law Sam Wegner, and his beloved aunts and uncles.

Richard was one of a kind.  He had an amazing work ethic even as a young child.  He got his first job at age ten chipping concrete off of bricks.  He thought he could get rich at a penny a brick.   At age eleven he got a job as a pinsetter in a bowling alley back before they had automated machines. I am sure this violated all child labor laws, lol.  While In high school, he worked two paper routes one morning and one evening all while taking college prep courses and playing varsity baseball.  When his dad was laid off and unable to pay for him to go to college, he enlisted in the United States Air Force so he could get their educational benefits.

While serving in the Air Force, he began attending college and he also worked at McDonald’s part-time to make ends meet.  While stationed at Ellsworth AFB he met his future wife Linda and as they say, the rest is history.  After his enlistment was up, they moved to Houston where he got a job working at NASA.  He worked long hours at NASA while attending college part-time and completing his engineering degree.  He lived on four to five hours of sleep a night for years.  Among his many accomplishments, he was most proud of the fact that in 1967 NASA built a prototype of the Apollo spacesuit for him which he tested in Chamber A, Building 32, at the Johnson Space Center.  That spacesuit is now in the Smithsonian Air and Space Museum. After retiring from NASA, Richard and Linda started and built their own small fledgling company, Southwest Seminars, into a successful nationwide company.

Richard enjoyed hunting in the Black Hills of South Dakota and he also loved to drive his camper to the Upper Peninsula of Michigan to hunt with his family.  He liked yard work and was a rare individual who would cut his grass in Texas with a hand mower when it was 100 degrees out.  He especially enjoyed playing golf with his golf buddies and was one of the oldest members of the group and the only one who liked to walk eighteen holes of golf rain or shine.  Richard loved his wife of 56 years, his children, his grandkids, his family and friends.  Also, he loved his dogs and cats.  In short, he was a great guy and an inspiration to others.  We will miss him forever.

THANK YOU FROM THE HERMLING FAMILY

At this time of social distancing due to COVID-19, I want to reach out and let all our family and friends know how much we appreciate all their social media, texting, phone calls, cards, and emails communications.

Thanks to all of you for your emotional support and kindness during this sad and difficult time.  It has meant the world to us.

The family would like to thank everyone for their love and support during this difficult and painful journey and loss.  Special thanks to:  Serenity Gardens and Melia (owner), Rusty (manager), and especially the staff who provided incredible, loving care for Richard.  Traditions Hospice and especially Kendall and Rudy for the wonderful care they provided Richard in the final stages of his disease. Cheryl, Gloria, and Nana who provided wonderful, private in-home care for Richard. The members of New Hope Church who rescued us during Hurricane Harvey and especially Sara Castenada and Patricia Bishop.  Griggs Video Services who compiled and put together an extraordinary tribute video.  Curtis Nickelson, a Serenity Gardens volunteer and professional musician.

Due to the COVID-19 restrictions, no services have been planned at this time. An online virtual remembrance will be available at a later date.