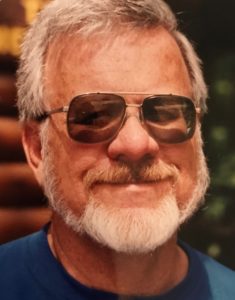 On Tuesday, August 13, 2019, Richard Herman Holzapfel passed away at the age of 80. Richard was born on July 23, 1939 in Alice, Texas to Herman G. Holzapfel Jr. and Ruth Slack Holzapfel. He received his bachelor’s degree from Texas Tech University in 1962 and later began his 34+ year career as a Safety Engineer for NASA’s Johnson Space Center. Richard always had a passion for fishing, wildlife and anything involving the outdoors, as well as great love of baseball. His favorite daily routine was walking his dog, Sugar, to his “Church Under the Trees”. He was admired and loved by everyone that had the opportunity to know him, especially his family. His infectious smile, positive attitude, and his genuinely kind and compassionate spirit are qualities that will live on in our hearts.
Richard was preceded in death by his father, Herman, and his mother, Ruth. He is survived by his: wife of 39 years, Rebecca Miles Holzapfel; daughters, Lisa Brooke Morgan, Monica Lynn Atkinson and husband Glenn, Angela Dawn Mancini, and Julie Diane Hoover and husband Britt; son, Scott William Holzapfel; sister, Carolyn Ruth Leonard and husband Rex; grandchildren, Chandler Dean Atkinson, Natalie Isabella Atkinson, Joshua David Holzapfel, Erikah Dawn Bertolasio, Dylan James Hoover, and Landon Scott Hoover; as well as numerous family members and friends.
On Saturday, August 17, 2019 Richard’s family will greet guests from 1:00 – 2:00 pm followed by a memorial service at 2:00 pm at Crowder Funeral Home on 111 E. Medical Center Boulevard in Webster, TX 77598. In lieu of flowers, those wishing to make a donation in memory of Richard may do so to Coastal Conservation Association Texas, 6919 Portwest Dr #100, Houston, Texas 77024, phone: 1-713-626-4222, or through their website https://ccatexas.org/donate/