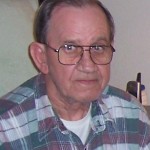 He was a longtime resident of Texas City. Rex was a veteran in the US Army. He worked as a Pipefitter for Local 211 for over 50 years.

He is preceded in death by his wife, Frankie Gilbert, grandson Jacob Moon, his parents and brother, Thomas Gilbert.

Visitation will be Wednesday, March 5, 2014 from 5:00pm to 6:00pm with the funeral following at 6:00pm at the James Crowder Funeral Home in La Marque.