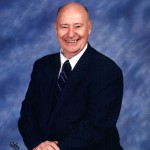 Norman Gail Trainer, 81, of Dickinson, Texas was born May 17, 1932 to Gail and Vina Ovilia Trainer in Leverett’s Chapel, Texas. God assigned him a new address February 25, 2014. Norman worked for Shell Chemical in Deer Park and Monsanto/Sterling in Texas City. He was an active member in the Masonic Lodge in Dickinson and LaMarque. Norman also proudly served 13 years as a police chaplain with the Dickinson Police Department. He was preceded in death by his parents and his sisters, Joyce Duckett and Barbara Gilstrap.